Selection of frost tolerant cultivars and understanding the mechanisms of frost hardiness could help to improve freezing resistance in olive plants. Olive cultivars may differ in frost hardiness due to differential survival of specific organs. The aim of this study was to screen different olive cultivars based on their stomatal density and metabolic modifications under cold conditions. The ‘Zard’ cultivar had the lowest while ‘Derak’ had the highest stomatal density, respectively. In another experiment, where entire potted olive plants were subjected to freezing stress (0, -6, -12 and -18 ˚C), ‘Zard’ and ‘Dehghan’ were found to be the most tolerant cultivars. They showed the lowest starch content, ionic leakage and wood injury. They also had the highest reducing sugar, phenolic and proline contents among studied cultivars. We concluded that ‘Zard’ and ‘Dehghan’ are the most tolerant cultivars and ‘Derak’, ‘Dakal’ and ‘Shiraz’ are the most sensitive cultivars to freezing injury.

Olive (Olea europaea L.) is one of the most important evergreen trees in the Mediterranean area. The olive tree grows mostly between latitudes of 30 and 45° in both hemispheres (Candev et al. 2009). However, in recent years increasing demand for better quantity and quality of olive oil has resulted in the cultivation of olive trees. This resulted in expanding olive cultivation areas into higher latitudes rather than its origin cultivation area in the Mediterranean basin (Mancuso, 2000)

A major limiting factor for growing olives at higher latitudes is exposure to minimum temperature especially in winter and early spring. When winter temperature drops below -7 °C, the aerial parts of olive tree can be damaged. This leads to yield reduction and in extreme situation threatens the life of the plant (Palliotti and Bongi, 1996). At temperatures below -12 °C, olive trees would face to severe damages which decrease its survival (Gomez del Campo and Barranco, 2005). Selection and use of tolerant cultivars are the most effective way for avoiding frost damage in olive trees. Plant physiological features such as stomatal density (Roselli et al., 1989), phenolic compound concentration (Roselli et al., 1992), ionic leakage (Barranco et al., 2005), and carbohydrate and starch concentrations (Lavee, 1986) have been used for selection of frost tolerant genotypes in olive.

In this study, changes in ionic leakage, reducing sugars, starch, proline and phenolic concentrations as biochemical features together with stomatal density as a morphological feature, were assessed in eight olive cultivars with contrasting levels of cold hardiness. Changes associated with freezing stress were analyzed to identify differences among cultivars in order to find suitable criteria for selection of tolerant cultivars in cold-winter regions.

Eight olive cultivars (‘Amygdalolelia’, ‘Conservallia’, ‘Dakal’, ‘Shiraz’, ‘Dehghan’, ‘Zard’,‘Dezful’ and ‘Tokhme-Kabki’) were obtained from the Experimental Agricultural Station and Natural Resources of Kazeroon, Iran, in 2012. Two-year-old plants (three plants for each cultivar) were propagated by semi-hardwood cuttings and were grown in 2 l plastic bags under greenhouse condition before exposure to freezing temperature. The plants were exposed to low temperatures (4 °C, 0°C, -6 °C, -12 °C, and -18 °C) for one hour. The temperature was gradually decreased to -6 °C by approximately 1.5 °C h-1 and by 5 °C h-1 thereafter. To thaw slowly, plants were removed from each low temperature treatment and were exposed to 4 °C overnight. To estimate the extent of freezing injury to the leaves, electrolyte leakage and biochemical changes were determined.

Ionic leakage was measured as described by Bartolozzi and Fontanszza (1999). Five discs with 10 mm diameter were collected from leaves of three plants that had been subjected to the different freezing treatments and placed in a test tube containing 25 ml manitol (0.2 M) and incubated in a shaker for 4 h. Electrolytic conductivity (EC1) was measured using digital conductivity meter (Model HI8633, USA). Solutions and samples were then autoclaved to kill the cells. Once the solution was cooled, conductance was again measured (EC2). Ionic leakage (EC%) was calculated based on the Equation (1).

Twenty four hour after removing from freezer, young fully-expanded leaves (0.2 g) were used for determination of proline. Samples were homogenized in 3% sulfosalicylic acid. After addition of acid-ninhydrin, proline content was determined according to the method described by Bates et al. (1973). The absorbance of the fraction with toluene was determined at 520 nm, using a spectrophotometer (Model UV-120-20, Japan).

Total phenolic concentration (TPC) was measured using Folin-Ciaceleture reagent. Five mg of dry leaf powder was mixed with distilled water: methanol (50:50) and extracted for 15 min. The extract was then centrifuged at 13400 rpm for 15 min and the remaining filtrate was re-extracted twice using 5% aqueous methanol (Gutfinger, 1981). One ml of extract was mixed with one ml of 2 % sodium carbonate (w/v) and was kept at room temperature for 30 min under dark conditions. The absorbance of the mixture was measured by spectrophometer at 750 nm. TPC was calculated as mass of gallic acid equivalents (GAE) per fresh weight (FW) mass of sample (g kg-1).

To determine soluble carbohydrate concentration, 0.1 g of leaf powder was twice extracted with ethanol (80%). The samples were then centrifuged at 5000 rpm for 10 min and supernatant was adjusted to 25 ml. Soluble carbohydrate concentration was measured according to Dubois et al. (1956). One ml of 18% phenol and five ml of sulfuric acid were added to one ml supernatant in a test-tube. The mixture was immediately shacked and its absorption was recorded at 490 nm using a spectrophotometer (Model UV-120-20, Japan).

Starch concentration in the leaf samples was measured using anthrone reagent (Mc Cready et al., 1950). To do this, five ml cold water and 6.5 ml perchloric acid (52%) were added to the pallet material collected from the sample which was used for sugar analysis and mixed for 15 min. Approximately, 20 ml water was added to the mixture and the samples was centrifuged at 5000 rpm for 10 min. The supernatant was separated and the same procedure was repeated. The supernatants were combined and left for 30 min at 0 °C. After filtration, the volumes of supernatants were adjusted to 100 ml. About 2.5 ml of cold anthrone solution (2%) was added and the sample was heated at 100 °C for 7.5 min, then transferred immediately to an ice bath and cooled down to the room temperature. Absorption at 630 nm was recorded using a spectrophotometer (Model UV-120-20, Japan).

Stomatal density was measured according to Roselli et al. (1989). Twenty leaves from midpoint of one-year-old wood were taken from each of the 10 cultivars (previous cultivars + Derak and Roughani cultivars). The stellate hairs were removed from the lower surface of each leaf using adhesive tape. A thin film of Actrifix was then painted on the clean surface, allowed to dry at room temperature and then peeled from the leaves. The films from each leaf were mounted on a glass microscope slide. The stomatal density was recorded with a light microscope using a 10X acular, 40X objective in a field area of 0.49 mm2. Three stomatal counts were made from each leaf position (apex, center and base) for nine observations per leaf, and in total 180 observations were recorded per each cultivar.

To evaluate cold hardiness of olive cultivars, plants were held at 22±1 °C for 24 h after removing them from freezer (Whirl pool, IRAN). For this evaluation 10 percent of stem per each cultivar was randomly harvested at each temperature. Individual pieces of stem were sectioned with rozar blade with 10 mm diameter and examined under a binocular microscope. The samples were checked for necrosis of the wood and samples with dull, straw or black/brown appearances were considered as dead samples. This experiment was repeated three times for each cultivar (Rekika et al., 2004).

Based on the obtained results for concentration of reducing sugar, olive cultivars can be ranked as the following:

Based on the obtained results for concentration of reducing sugar, olive cultivars can be ranked as the following:

Based on the obtained results for concentration of phenolic compounds, olive cultivars can be ranked as the following:

Based on the obtained results for stomatal density, olive cultivars can be ranked as the following:

The order of wood hardiness among studied cultivars was as the following:

In the current study, freezing temperature resulted in a significant increase in ion leakage (Table 1). This indicates that electrolytic leakage can be a useful tool for distinguishing frost resistance among olive cultivars. Cultivars such as ‘Zard’ and ‘Dehghan’ with the lowest electrolytic leakages can be likely grown in cold areas with less visual symptoms of damage under freezing temperatures. These results are in agreement with Bartolozzi and Fontanazza (1999) who reported that resistant cultivars due to low ionic leakage from leaves show slight negative responses to freezing temperatures.

Starch, is a type of polysaccharides that converts to simple sugars through activity of amylase and maltase enzymes. It has been shown that activity of these enzymes can be induced by cold temperatures (Hallwell 1980). In our study, the highest concentration of reducing sugars was concurrent withmaximum freezing resistance. Highest reducing sugar concentration was observed in resistant cultivars (e.g. ‘Dehghan’), while sensitive cultivars had the lowest concentration of reducing sugars (Table 3). Reducing sugars play an important role in osmotic adjustment of cells, which helps to prevent intracellular freezing. The results of this study are in agreement with the other studies on walnut (Juglans regia L.) (Ameglio et al., 2004) and pomegranate (Punica granatum L.) (Ghasemi et al., 2012).

There was a strong relationship between cold hardiness and proline concentration in the leaves of olive. Exposure to freezing stresses led to activation of an osmotic adjustment mechanism through the accumulation of proline. In the present study, when the temperature was lowered from 0 °C to -18 °C, proline concentration increased from 23.64 µM g-1FW to 79.99 µM g-1FW, respectively. When exposed to different freezing temperatures, tolerant cultivars, such as ‘Dehghan’, ‘Tokhme-Kabki’ and ‘Zard’, had higher proline concentrations than sensitive cultivars such as ‘Dakal’ and ‘Shiraz’ (Table 4). Herber et al. (1973) reported that proline is capable of preventing freezing-induced membrane damages. Proline also contributes to solute accumulation, presumably by protecting proteins and membrane structures. Proline may act as a scavenger of reactive oxygen species (ROS) under stress conditions (Verslues et al., 2006).

Total phenolic concentrations in tolerant cultivars, such as ‘Dehghan’ and ‘Zard’, were higher than their concentrations in sensitive olive cultivars, especially at -18 °C. This is in agreement with Ortega-Garcia and Peragon (2009) who reported that exposure to strong stress conditions led to accumulation of phenolic content in leaf samples. Accumulation of phenolic compounds under low temperature stresses may be related to their antioxidant activities and therefore phenolic compounds may offer protection against oxidative damage induced by freezing stresses (Ortega-Garcia and Peragon, 2009).

The results of our study showed that the more resistant cultivars, the lower stomatal density on their leaves. ‘Derak’ and ‘Amygdalolelia’ cultivars had the highest and ‘Zard’ cultivar had the lowest stomatal density. The number of stomata within a cultivar is usually affected by environment; therefore, evaluation of cultivars should only be made within a specific environment (Roselli et al., 1989). 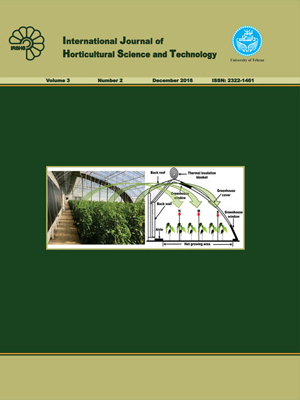